During the tumultuous months and years of the so-called Arab Spring, uprising began to take place in countries such as Egypt, Syria and Libya. Interestingly, many of these protests and uprising created by the public, were in response to government crack downs on freedom of expression and writing. Additionally, citizens became sick and tired of living in fear of leaders who ruled them with dictator-like ferocity. Everything from words, to internet use and written language was being regulated in the harshest of ways. In some countries, such as North Korea, people become jailed or worse if they speak their own opinions about the government through writing.

The Arab Spring would not have materialized if it were not for the freedom of expression through writing. it was widely reported during the beginning of the movement that most people were able to organize their protests through electronic and hand-written word. This included mobilization through social media. Social media websites such as Facebook and Twitter became the primary avenues for many people to spread the word about their cause. It allowed people to communicate safely, where internet access was available. This event only served to heighten the importance that freedom of expression through writing plays in everyone’s lives.

It is a challenging endeavor to garner support when it becomes to protecting your freedom of expression. Government laws often keep people from expressing their desires for the freedom to speak and write what is on their minds. In some countries people are arrested, never to be heard from again for writing down what is on their mind. Whatever they write is often turned over as evidence of treason, and some of these people are sent to labor camps for the rest of their lives. this is a true fear for many people, but the good news is that individuals are taking a stand in the fight for freedom of expression through writing.

One of the primary reasons why dictators and ruthless people hate freedom of expression through writing, is that it allows for the spread of knowledge. When people are treated poorly, those who are at fault do not want the public to know. However, if someone is able to express their concerns or ask for help through their writing, then they stand a much better chance of pulling through the situation. Written and spoken language are incredibly important aspects of the freedom of expression, so many people are persecuted as a result.

As long as there are places in the world which limit the freedom of expression through writing, there will be protests which seek to promote change. A democracy is the best way for people to work together, and many proposals and suggestions are made through writing.The only way to ensure that people are treated with dignity and respect is to preserve the ability to write what is on your mind. If you believe in everyone’s right to an opinion, then you should be a champion for those who struggle to have their voices heard through written expression. 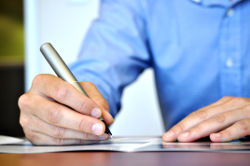